Net Neutrality is a hotly contested issue, with temperatures raised even higher by the use of confusing terminology and misleading labels. There is no denying it can be a complex issue to understand. I’ve personally had conversations with friends who’ve argued that they expected a web geek like me to be against Net Neutrality and for Restoring Internet Freedom.

They couldn’t be further from the truth.
I use links like this one to help friends better understand Net Neutrality and what is really at stake.

The “Restoring Internet Freedom Act” ?
I haven’t heard such a weaselly name since The Death Tax.
Politicians are really great at coming up with names, aren’t they?

Rather than use this post to focus on the myriad reason eliminating Net Neutrality would be bad for everyone (except broadbrand providers), let me pose just a couple scenarios which might hit close to home for our retail friends and clients.

Picture the perfect customer of your store.
They pick-up their mobile phone to call you, but when they dial your number instead of hearing it ring, they get a busy signal and are redirected to a competitor. Worse yet, what if instead of even being put through to your line they hear a message on the other end of the line which says:

“This retailer is not part of your local shopper calling package. Press 1 to have your call forwarded to Amazon. Press 2 to choose Walmart.”

This seems absurd, of course!
Phone companies are not allowed to play favorites or charge more to connect calls to one phone number over another, right? Unfortunately this is almost identical to the situation now being negotiated in Washington DC. The Net Neutrality mandate says the internet needs to be treated just like a public utility. Everyone calls get put through to every number equally. Water runs through the taps of all homes equally. Electricity runs at the same levels in every neighborhood.

Eliminating Net Neutrality is the difference between the landline phone service and the Yellow Pages phone book.

The telephone network runs wires to every home and allows everyone the same access to the same speed and connection of service. A private phone directory grants favored positioning, ad size, bold print, color ink, etc. to those to pay a premium.

Mobile phone networks are private networks
You pay different rates for different services across every network. They decide how many minutes you get, how much data you may access in a given month, and how much that access costs.

Cable television vs. Network television
In the old days of television broadcasting over the airwaves, every set could access the same set of available channels in its area. With the advent of paid cable networks, users now purchased “blocks” of programming and channels — some based on their personal interests and some that came bundled with the subscription levels. As a non-sports fan I was always frustrated by the fact that part of my monthly cable bill went toward paying for access to what seemed like 20 different sports channels (of which I watched ZERO.) But, they inseparable from my subscription package.

But internet access is different (for now).
You pay one fee — albeit those fees vary with the Internet Service Provider (ISP) — but you can received access to any and every website you desire. You can access Netflix or the Library, listen to Spotify or stream your local radio station. All control is yours with single access.

Now envision subscribing to the internet the same way you subscribe to cable channels. 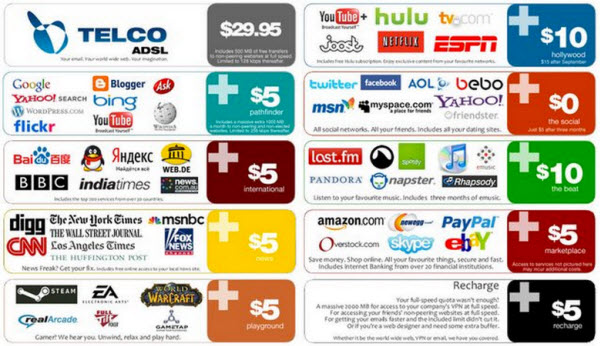 You want to buy something on your local retailer’s website?
Hope you bought the “Shopping Spree” web package.

Worse yet… what if your store website doesn’t get included in any of these web access packages because Amazon or Walmart bought out your listing? Or maybe people can still access your site but the ISP has throttled down access to small local websites like yours, making images and content load at a snail’s pace while larger retailers who can afford a spot in the internet fast lane have load speeds 2X and 5X of your own. You think your online shoppers will wait for an image to load or a shopping cart to update? Let’s put it this way… would you forgo today’s high velocity internet speeds and willingly return to the days of AOL dial-up speeds? I say if that happened you’d be screaming louder and at a higher pitch than the old 2700 baud modems we used back then! The answer is a resounding NOPE.

What if the broadband provider offered a “Buy Local” website collection, but only allowed one store in each category? Sam’s Neighborhood Shoe Shop might get booted in favor of Helena’s High Heels on High Street because she paid a higher rate — or you both get boxed out by the DSW location at the suburban mall.

We can’t rely on the broadband providers to police themselves. 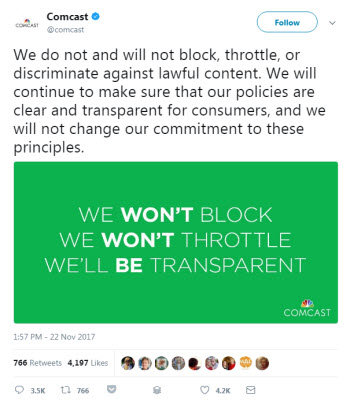 When it was first announced that repealing Net Neutrality was on the table, every major ISP leapt at the opportunity to assure the public they would never, ever, take advantage of this potentially new change to the power dynamic. They said it was in their best interest to keep rates the same across the board and that they we should be ashamed of ourselves for even thinking that they would ever throttle website speeds and charge a premium for this kind of access. Just days ago, Comcast posted another heartfelt tweet of “you can trust us”.

But not even a week after this latest promise of principled transparency (and after repeated public assurance unequivocally stating that they have never, and are not, considering prioritized fast lane deals) they seem to have reconsidered their exact level of commitment and now… not so much.

Consider the information published in a November 27, 2017 article on the ars technica website…

“…with Republican Ajit Pai now in charge at the Federal Communications Commission, Comcast’s stance has changed. While the company still says it won’t block or throttle Internet content, it has dropped its promise about not instituting paid prioritization.”

If Net Neutrality gets nixed, the only winners are the broadband internet service providers because they will now be allowed to bill, and bribe and profit and receive payments from all sides; consumers, businesses, online publishers, streaming broadcasters, and on down the line.

Hey, when it comes down to it — your views on this topic may vary from mine.
The world is a far more interesting place when filled with challenging view points, but like the friends I mentioned above — please make sure you take the time to really understand what this proposed change means to you personally and professionally. This is not an issue relegated to a few “power users” like online gamers and Netflix bingers. These changes will impact your your customers and your business.

Here’s a link to a very good discussion on RetailWire about how the end of Net Neutrality could impact retailers.

All the information you need to educate yourself on this important topic can be found online by anyone with an internet connection.

Get it while you (still) can.

About Don The Idea Guy

Don The Idea Guy is the resident content manager and marketing geek at Midwest Retail Services. As a professional brainstormer, writer, speaker and business consultant, Don has been lucky enough to connect with a variety of successful business people, sales professionals, authors, and thought-leaders. He's bringing them (and all their valuable insights!) to the Midwest Retail Services blog so they can share their ideas with YOU -- our customer. The marketplace is more competitive than ever and Midwest Retail Services wants to give you every advantage possible to increase your profits and grow your business. We win by helping you win.
View all posts by Don The Idea Guy →